5 average based on 1 vote

All park rules must be followed. 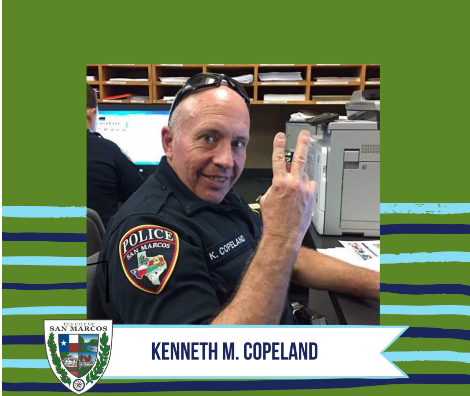 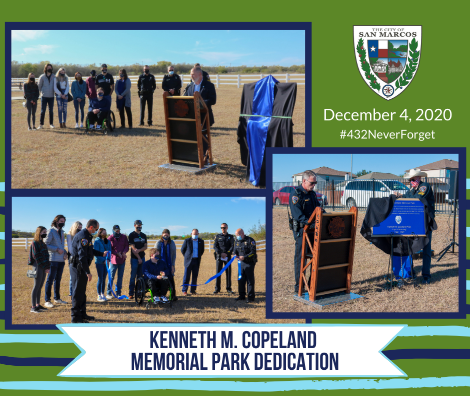 On Monday, December 4, 2017, the San Marcos Police Department and its citizens lost a friend and committed public servant with the death of Officer Kenneth M. Copeland. Officer Copeland was killed in the El Camino Real neighborhood while serving an individual with two warrants, one for assault-family violence and one for an injury to the elderly.

Police officers from San Marcos, Hays and surrounding agencies set up a command post in front of El Camino Real Park. It was here that everyone learned of Ken’s death. In the hours following, SMPD and partner agencies were joined by families and neighbors who came alongside the blue, lending their support in the midst of their own grief over the loss of their beat officer.

Ken was born on November 26, 1959 in Louisiana and his family moved to Houston in 1971.  He was hired by the San Marcos Police Department in March of 1998 and he served the citizens for almost twenty years.  Ken was married to Sheila and was the father of two sets of twin boys, a member of the United States Coast Guard, a scout leader at Mendez Elementary in San Marcos and a well-loved police officer. Ken was well known for his infectious smile and for going the extra mile with the citizens of San Marcos.  He kept a cooler of Topo Chico mineral water in his patrol unit and would often share them with citizens during his shift.

In the days, weeks and months after Ken’s death, the community outpouring of support to the members of the police department and of public safety as a whole was a testament to what Ken did in this community. His style of policing was straightforward and he was able to bridge the gap between law enforcement and the community he served.

On December 4, 2020, with consensus from our Mayor and City Council as well as numerous boards and commissions across the City, El Camino Real Park was officially dedicated and renamed to Kenneth M. Copeland Memorial Park. This park, where Ken used to shoot hoops with neighborhood kids and pass out smiles and Topo Chico, is a tribute to Officer Copeland’s work and shows he will live on in the hearts of those he served. In this, we remember not only the ultimate sacrifice that Officer Copeland made, but the unique style of policing that he embraced as he sought to build relationships, day in and day out. May we all remember and emulate his passion and commitment to those we serve.